VELAZQUEZ AND THE HABSBURGS 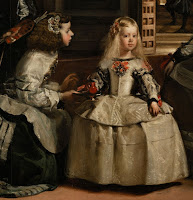 "I saw an article in the freebie newspaper, the Weekender, called "The artist and the royal" so I attended the presentation which was on Diego Velazquez and the Habsburgs.

Having followed adult education in History of Art, civil and religious architecture, history of Brittany (France) from the settlement of the Welsh and Irish, through the middle ages.... in France, I am an enthusiast of learning culture.

Now that I am in Spain, I have found a person, Karla Darocas, who is also enthusiastic, and knows how to transmit her knowledge of Spanish culture.

I learned a lot about Velazquez and how Monet and other impressionists were influenced by Velazquez (Le joueur de flute).

Karla Darocas has a very natural teaching style, ease, language, comments and I would recommend her to others."