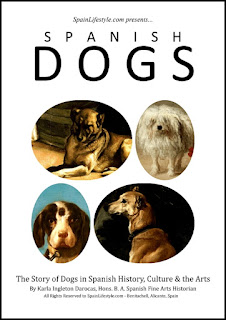 "Karla’s latest book Spanish Dogs is an extensive history on dogs from prehistoric times until the present day.

A couple of things stand out in my mind, after having read this book.

For example, I never knew that dogs, mainly Mastiffs, were used during times of war during the Middle Ages. Clad in armor they would charge at the horses during cavalry brandishing on their backs canisters of burning resin which would spook the horses and bring them down along with the enemy soldiers on their backs.

I also found the origin of the lapdog, or toy dog, at the end of the Middle Ages to be very interesting. Because of their small size these dogs would be welcomed in the family home and be depicted in portraits. They would also be used as bed warmers and to attract the fleas away from their very unhygienic owners for whom a bath was a rarity and related to prostitution.

Here’s a fun fact from this book! The winter months made it too cold for bathing, therefore being delayed until the Spring, which saw the beginning of the custom of having weddings in May and June. As an extra measure the bride would carry a bouquet, thus hoping that the scent of the flowers would mask the odor of the body.

Whether you are a dog owner or not - this book Spanish DOGS is an insightful read into the fascinating world of dogs and the part that they play, and always have played, in our lives.