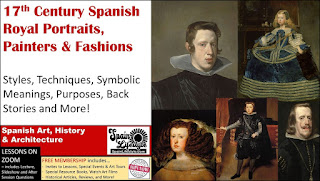 “A fascinating lecture from Karla on 17th Century Spanish portraits. As ever the listener learnt as much about Spanish history as Spanish art so making these lectures a must for anyone keen to learn more about Spain as their chosen home.

Karla is a great fan of the Spanish painter, Velasquez, and by the end of the lecture we were in agreement. We were shown how Velasquez’ style evolved over time and was shaped by the influences of the 17th Century Spanish court he lived in and by the developments in painting, especially from Italy where he studied in Naples. Like his contemporaries he began by showing his mastery of painting the textiles his sitters were wearing. However, at his height his skill was much more about showing the soul of his subject which is so affecting today as they gaze out at us hundreds of years later.

Karla took us through the work of several other Spanish artists of the time and it was here in particular we learnt so much about the fashions of the 17th Century Spanish court. The clothes were super-sumptuous and unimaginably expensive. They also were designed to engage with the viewer using signs and symbols which communicated meaning. The painting of little Prince Philip Prosper showed him wearing a host of charms to protect him in different ways but sadly it was all in vain and he died very young. There were other symbols too such as only royals could have a chair in view as only a royal could sit in the presence of royalty.

We were given several other insights into life at that time, at least amongst the very wealthy. Perhaps as ever beauty was associated with pain. Ladies cleavage was held in place by wooden planks in their dresses and there was no such thing as a left and right shoe – all shoes were the same.”